I just got back from an epic almost-5-week speaking tour which took me to two countries, eight cities and had me hopping on and off a total of sixteen planes from beginning to end. Phew!

It was tiring, sure. But it was also incredibly rewarding as I got the chance to meet new people, present at new events, connect with readers of this blog and listeners of my podcast, as well as create a ton of online content!

In fact, throughout the course of September, I published 3 blog posts and 4 podcast episodes – all of which were pre-written / recorded and fully scheduled, along with social media updates, etc., before I even got on my first plane – thanks to a solid content creation schedule in August and my great VA team.

However, the one thing that I’m most proud of in regards to content in September was the fact that I also produced a total of 30 videos in 30 days, as part of my Vidtember Challenge!

When I announced that I was going to be doing this, some people thought I was nuts – but, mostly people were excited to see what I was going to put together and I even had several people join me in the challenge, which was awesome.

How I Did It

Planning – I did a little bit of pre-planning for shooting the videos, in regards to making a list of the type of content I’d like to produce. And I did produce a lot if – not all. Some ideas simply did pan out. I even shot one clip before leaving the Philippines, in which my wife joined me to talk about working together with your spouse. It was a popular one!

Shooting – I shot every video throughout the month with my iPhone5. I knew I would have to keep things as ‘mobile’ as possible. So, that’s exactly what I did. For noisy areas that I could be shooting in I brought along a external mic – all my kit is listed below!

Editing – I thought long and hard on this one. I usually give my raw video content to my Video VA for him to edit it all together. However, timing wasn’t going to be on our side throughout the month, and I’d have had to get a week in advance of recording if this was going to work. Something I didn’t want. So, I decided I was going to edit the videos quickly myself. On the road.

My Video VA put together a cool intro and outro animation, as well as a lower third graphic (typically sits at the bottom of the screen with a name or something similar for a few seconds at the beginning of a video), I then dragged them into a Screenflow document and simply used it as a template file. As I’d shoot each day, I’d import with my iPhone cable and simple drag and drop into Screenflow, and that was that!

Uploading – When I decided to do this I knew that I was going to be in places where the internet connection was not going to be a problem, so uploading the videos wasn’t going to be an issue.

The Kit I Used to Do It

Anyone that knows me knows that I am an incredibly light traveler.

I despise having to take anything ‘extra’ on trips ‘just in case’. I’d rather leave it, whatever ‘it’ my be and purchase whatever I need – if I truly need it, when I’m on the trip.

Here’s a collection of things that were in my shoulder bag (this is the one I have, in case you’re curious!) at all times, so that I could create great video content on the go, without hassle, no matter where I was!

There’s also a few extra bits and pieces in there, too – which show you how I roll on the go. 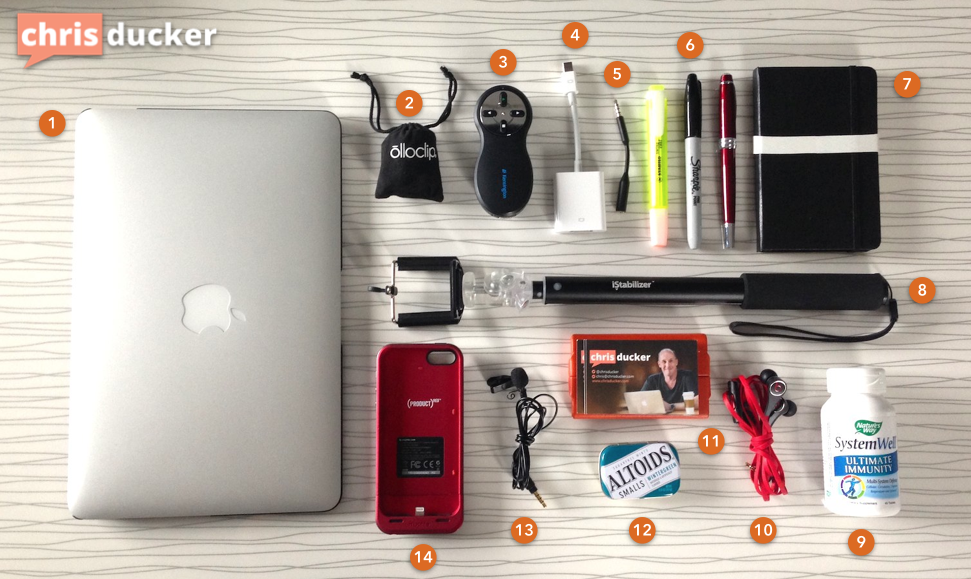 Note: Some of the links below are affiliate links.

Overall, it went very well. However, I have to admit there was one day that I was tired, and by 10.30pm I hadn’t shot a clip that day.

I was sitting in the hotel bar enjoying a nightcap with my best bud, Pat Flynn and told him that I hadn’t shot today’s video and that I would just catch up tomorrow. He looked at me with a very serious face and said, “Dude, you can’t miss a day! Come on, let’s shoot one together right now, so you stay on track!”. So, we went up to my room and shot the clip and I quickly knocked it together in Screenflow and uploaded it.

All in all, the 30 videos I shot as part of the Vidtember Challenge have garnered (at the time of this post being published) over 5,500+ views combined, an average of 186 views per video.

Not to mention the fact that they were shared countless times via social media, introducing me to new audiences and will obviously continue to be linked to and shared on this site, as well as by other people online. That’s the great thing about online content – it doesn’t disappear.

More and more people will stumble over that content for months, if not years to come – and it’ll continue to serve my community (both present and future) by helping, inspiring, educating and entertaining them.

Question: When was the last time you set yourself a content creation challenge? How did you go? Share below. In this video, I show you the behind the scenes of my remote online coaching set up! Whilst on our short family staycation, I had How to Turn Fans into Customers with David Meerman Scott

Marketing strategist, David Meerman Scott joins me to talk about how to turn fans into customers! We deep dive into David’s book, Fanoracy: Turning Fans

This website uses cookies to improve your experience while you navigate through the website. Out of these cookies, the cookies that are categorized as necessary are stored on your browser as they are essential for the working of basic functionalities of the website. We also use third-party cookies that help us analyze and understand how you use this website. These cookies will be stored in your browser only with your consent. You also have the option to opt-out of these cookies. But opting out of some of these cookies may have an effect on your browsing experience.
Necessary Always Enabled
Necessary cookies are absolutely essential for the website to function properly. This category only includes cookies that ensures basic functionalities and security features of the website. These cookies do not store any personal information.
Non-necessary
Any cookies that may not be particularly necessary for the website to function and is used specifically to collect user personal data via analytics, ads, other embedded contents are termed as non-necessary cookies. It is mandatory to procure user consent prior to running these cookies on your website.
SAVE & ACCEPT

Join Chris Ducker, March 29-31, 2022 and learn how to… Build Your Audience. Monetize Your Expertise and Become Future-Proof! Discover your next business-building move in 5-minutes (even if you’re just starting out) without feeling intimidated or overwhelmed!